USMCA stumbled out of the gate

We had been looking forward to this day for months. After a successful campaign to include migrant worker protections and a labor chapter in the new trade agreement, we had high hopes that the new agreement would provide a channel for migrant workers to access justice. Today, July 1, USMCA goes into effect.

But a last-minute response to one of our complaints quickly dampened our optimism. In 2016, we submitted a complaint under the NAFTA labor side accord, arguing systemic sex-based discrimination in guestworker programs. CDM’s Migrant Defense Committee members Adareli Ponce and Elisa Martinez filed the complaint alongside our team and allies. The evidence we presented clearly proved that women are denied opportunities or channeled into lower-paying jobs, given the lack of government oversight. For example, less than 10% of H-2 visas are issued to women. 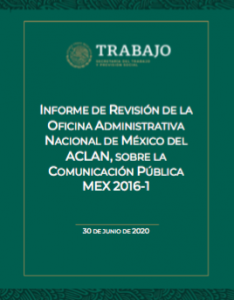 National Administrative Office finally issued a report on our complaint, stating that they “recognize the existence of mechanisms in the United States, to which people can go to manifest the facts that they consider discriminatory.” The Office absurdly offered that workers can call ICE to report abusive employers or turn to brochures and posters about how to submit complaints to federal government agencies. This response is frustrating and disappointing.

The USMCA shows promise, including for its provision against gender-based discrimination. Unfortunately, the new agreement will likely be implemented by the same people who responded to our complaint, and their response to our complaint sends the message that they won’t take the treaty’s labor provisions seriously.

Our optimism may be dampened, but our determination is stronger than ever. There are opportunities in USMCA — and we will use its mechanisms to hold governments accountable for failing to protect workers like Adareli and Elisa.