We need a strong Title VII 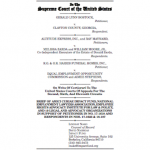 Numerous federal courts agree: discrimination based on sexual orientation and gender identity is illegal sex-based discrimination under Title VII of the Civil Rights Act. And yet, a few outlier courts have ruled this kind of blatant discrimination to be legal.

Migrant workers often face multiple forms of discrimination. We need a strong Title VII. That’s why on July 3, 2019, we joined our allies at the Impact Fund, the National Employment Lawyers Association and 19 other organizations to file a friend-of-the-court brief in the U.S. Supreme Court arguing that the Court should adopt this interpretation of Title VII.

The inconsistent rulings of lower courts have given license to homophobic employers to discriminate against LGBTQ workers, including migrant workers. We stand with our LGBTQ allies in the fight to stamp out insidious discrimination wherever it is found.